Henry Hood, Coxswain of the Seaton Carew Lifeboat, photographed after his retirement, wearing an RNLI cork life-jacket. The photograph clearly illustrates the small blocks of cork, sewn together and held tight against the body with a leather belt.

In 1854, Captain Ward, a Royal National Lifeboat Institute (RNLI) Inspector, invented a new type of lifejacket made from several narrow blocks of cork sewn onto a canvas vest. He based his design on early flotation devices used by fishermen and sailors in Norway. His construction allowed for both suitable buoyancy and ease of movement when the wearer was rowing or swimming – it also protected from the harsh elements the wearer would be exposed to at sea.

Before cork lifejackets came into use, the most primitive form of lifesaving equipment had been an inflated animal bladder. Even this was not available to shipwrecked seamen – their only chance of survival was to cling to floating wood and wait to be rescued by the Lifeboat.

Shipwrecks off Hartlepool, after the Great Storm on the 11th of February 1861

The benefits of the cork lifejacket were catapulted into the public sphere during the Great Storm of 1861. In Whitby, the crew of the Lifeboat were on their sixth daring rescue in one day, when the Lifeboat tragically capsized leaving Henry Freeman the only surviving crew member. As the newest (first ever Lifeboat launch) and youngest member of the crew, Freeman had been given the new design cork lifejacket by Coxswain John Storr. The jacket had been a sample sent to Whitby Lifeboat Association by the RNLI, as they attempted to persuade local stations that modern equipment could be provided through a national body. Henry Freeman was the only member of the crew wearing a lifejacket, and it was this piece of equipment that was credited with saving his life.

It was not until the lifesaving services such as the RNLI became established that safety of mariners was addressed. Events like the Whitby Lifeboat disaster along with other similar cases encouraged ship-owners to take more responsibility. Especially after seeing how effective, inexpensive and simple equipment could be. The RNLI began to sell reduced price lifejackets in wooden chests. They advised that these were kept on the top deck of a vessel, with the shoulder strings already tied so that the jacket could be easily applied in an emergency.

Rigid cork lifejackets remained popular for over fifty years, but in 1904, a new design containing cells filled with kapok; a soft, fibrous vegetable material was introduced. These jackets were more flexible and comfortable than cork, which had been known to render the wearer unconscious or break jaws when jumping from tall ships into water. Kapok was quickly replaced by foam and then inflatable’s as it lost buoyancy when squeezed or when it had been submerged for long periods of time.

Since the days of the cork lifejacket, the RNLI has made huge improvements in lifesaving equipment. Today’s lifejackets provide security and comfort; they are more buoyant and are fitted with emergency lights and flares. They are a far cry from their predecessors and ensure that the wearer is safer than ever.

All images copyright to the Museum of Hartlepool

2 thoughts on “The Life Jacket” 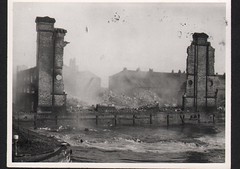 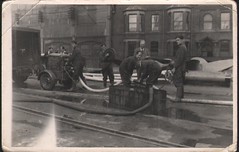 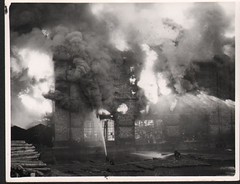